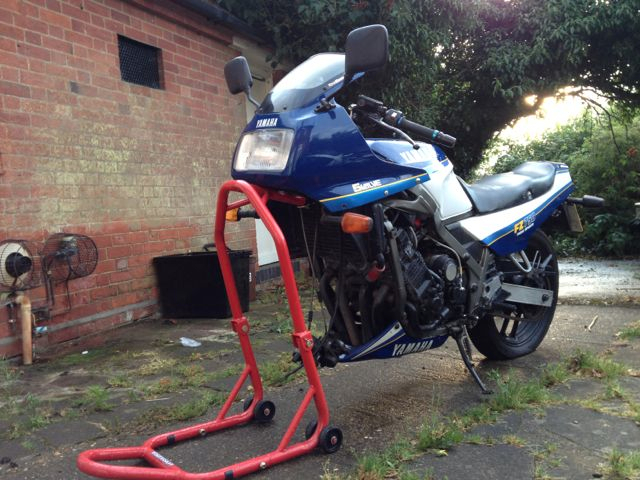 It isn’t what we now consider “user friendly”.

I fitted a new (old) WP shock and although a lot of this FZ’s evil handling gremlins (which stemmed from no damping in the 27 year old OE shock) were immediately exorcised, it doesn’t detract from the inherent flaw in the design; namely the strange 16/18” wheel sizes.

Steering an FZ is a bit like a riding a canal boat on tarmac. Imagine a bike that has a normal wheel at the back but a furniture castor on the front. It’s long, it’s low, it’s heavy and once it starts to drop into a turn it’s not keen on stopping! However – that said, it’s manageable and once mastered it’s fun.

Sure a good rider can still make hay on track or on fast roads on an FZ, it’s not totally awful, but the same rider on something newer with the right size wheels would be more comfortable and faster.

Yamaha spotted this and eventually went to something approaching modern wheel sizes for a later update, but too late for the FZ to be taken seriously amongst much better sportsbikes that were on the market from Kawasaki and Suzuki.

2. Buying parts can be a pain.

The FZ is a model where parts sit in that hinterland between manufacturer deletion and really deep classic community support.

It’s true that consumables should never be a problem, but stuff like screens, half-side fairings and dashboard trims are unavailable new, and they are the bits that are giving in to age.

Some bold UK based companies are taking on production of new FZ stuff. Midnor mouldings from Norfolk make popular Fibreglass replica bodywork, and I’ve heard Gibson Exhausts, who made stacks of FZ race pipes back in the day are close to restarting production of their legendary FZ systems.

All we can hope for is that the bike continues to build up a decent following and suppliers start to see the value in making the hard to get bits and bobs for them.

Much like the handling, when riding the FZ you’re asked to make some concessions to age and technology.

My bike has a better master cylinder from something early 90’s on board as well as braided hoses, and the brakes consequently are actually pretty good for an 86 FZ. If that master cylinder weren’t there, the brakes, as per my last FZ would be concerningly mediocre for such a fast bike.

As time has rolled by since 86 we’ve learnt to expect our brakes to work, and work well. Being asked to take a step back in time with something as fundamental as the things that stop us is quite hard!

4. Back to the tyre sizes

There isn’t a great choice of rubber for these odd sized wheels.

Although tyres are much better than they were in 85/86 the FZ is still not getting bang up to date tech in the choice of tyres available, and never will. In fact, you can’t even get radial tyres for these!

Best suggestion is the Avon AM26 Road riders  or the Michelin Pilot Activs fitted to mine, which so far seem really good in all weathers and are wearing well.

It’s not brandy; it won’t get better with age.

Bits of it are tired. It’ll always need something, and although I would undertake almost any journey on it tomorrow, I have to face the facts that once or twice a year it’s going to need some love, some expense and some “me time” in the workshop. Head bearings, fuel tank overflow blockage, carb cleaning – these are all things I’ve had to look at in the last year, and there’ll be more again in the next year.

When it does need looking at, as it says in Reason 2, I may or not be able to get the parts I need easily. I don’t know if that truly makes it any less of a good proposition for (maybe) Bike of the year 2014, but as it’s now officially out of warranty (since 1987 in fact) it’s definitely a consideration!

Owning a modern classic bike can be great. The downsides as already mentioned are the extra maintenance and sourcing of parts and services for a model long since passed. The upside of it is that once you’ve found the right resources to help, you’ll be part of a community that help to keep these things going. FZ750′s although rare have a good fan base all over the world. Search Google or Facebook, and you’ll find enough sites and groups populated with likeminded folk to share any burdens you face. You can find deep knowledge, cheap parts or just good old support to make the challenges easier to face.

That actually makes the painful side of classic ownership a highly social and enjoyable pursuit.

My FZ is currently a keeper, a rolling restoration, and I hope you’ll see more posts about it as I write.